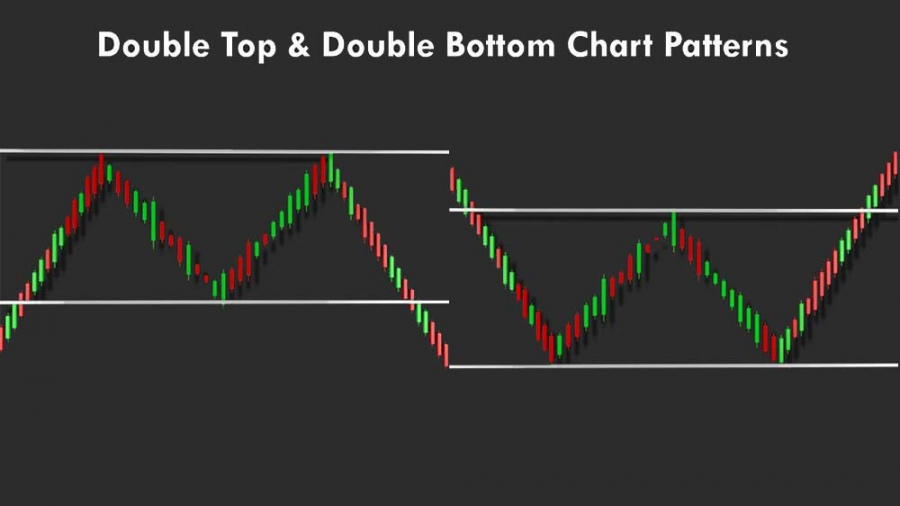 What are double tops?

A double top is a bearish reversal trading pattern. It is made up of two peaks above a support level, known as the neckline. The first peak will come immediately after a strong bullish trend, and it will retrace to the neckline. Once it hits this level, the momentum will shift to bullish once again to form the second peak.

For the double top pattern to be confirmed, the trend must retrace more significantly than it did after the initial retracement following the first peak. Often, this means that the price momentum breaks through the neckline level of support. The bearish trend continues for a medium or long period of time. 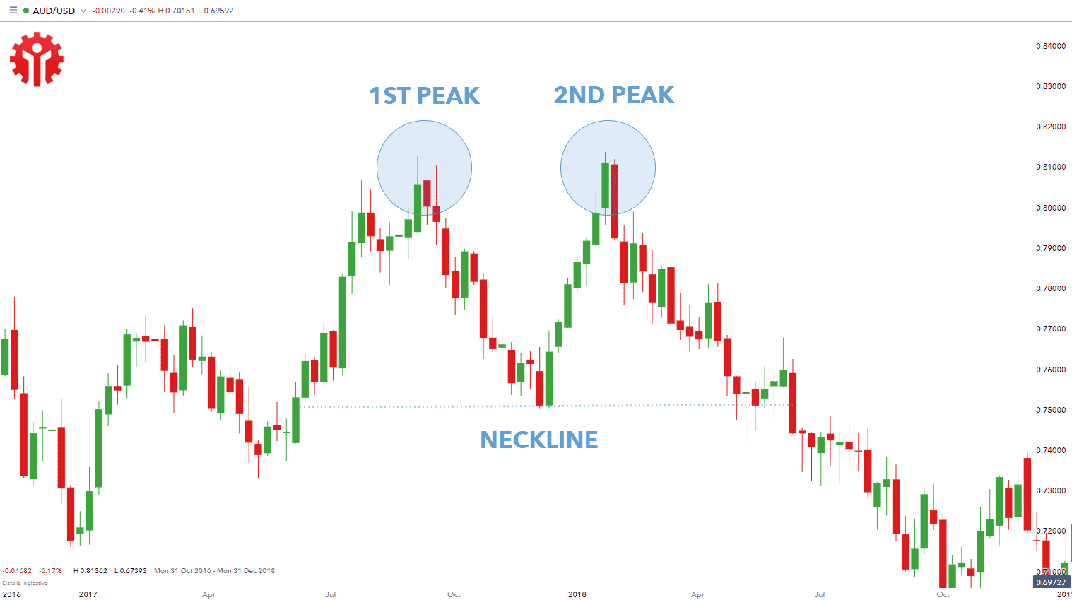 Traders who use the double top pattern in their market activity will usually try to open a short position at the height of the second peak in anticipation of the bearish reversal that the pattern sometimes forecasts – represented by the red arrow below.

What are double bottoms?

A double bottom is a bullish reversal trading pattern. It is made up of two lows below a resistance level which – as with the double top pattern – is referred to as the neckline. The first low will come immediately after the bearish trend, but it will stop and move in a bullish retracement to the neckline, which forms the first low.

Once the bullish trend has hit the neckline, it will need to rebound and enter a bearish trend once more until the momentum shifts to bullish, which will form the second low. Once the second low is formed, the trend will need to more permanently reverse into bullish momentum.

The trend is confirmed when the bullish trend breaks through the neckline level and continues upwards. Many traders will seek to enter a long position at the second low. The bullish reversal is signified in the price chart below by the blue arrow. 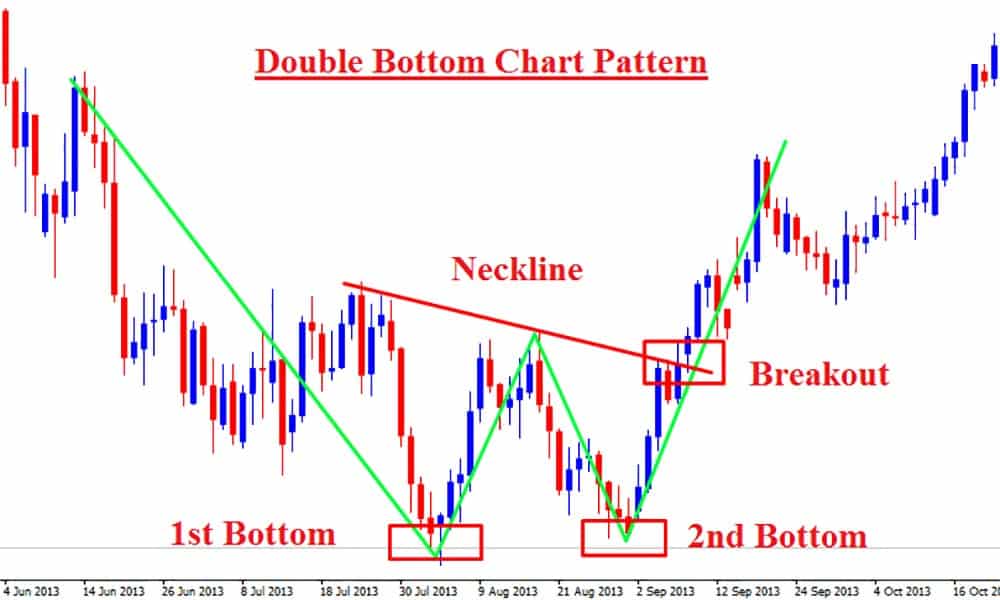 What do double tops and double bottoms tell traders?

A double top or double bottom can tell traders about a possible trend reversal. However, in both cases the reversal is not confirmed until the prevailing trend has formed the second peak or second low before reversing in an opposing direction to the trend before the first peak or first low.

How to trade on double tops and double bottoms

Follow the steps below to trade a double top or a double bottom:

As an example of a double top trade, let’s look at the price graph below. As you can see, the trend before the first peak is overall bullish, indicating a market which is rising in value. However, the upward momentum stops at the first peak and retraces down to the neckline.

At this point, if the momentum had continued lower, the pattern would have been void. But, it bounced off the neckline and resumed the bullish trend. This continued only for a short while before the asset once again lost its momentum. This time, the retracement broke through the neckline which signified a more permanent reversal in the overall momentum of the asset’s value.

To profit in this scenario, a trader would try to open a short position at the height of the second peak – before the pattern had been fully confirmed. They would likely exit their short position at an early sign that the trend was once again turning bullish.

Traders can use stops – including guaranteed stops – to protect themselves from sustaining a loss in case the market continues to rise after the second peak. You can learn more about risk management at Instaforex Nigeria Academy. 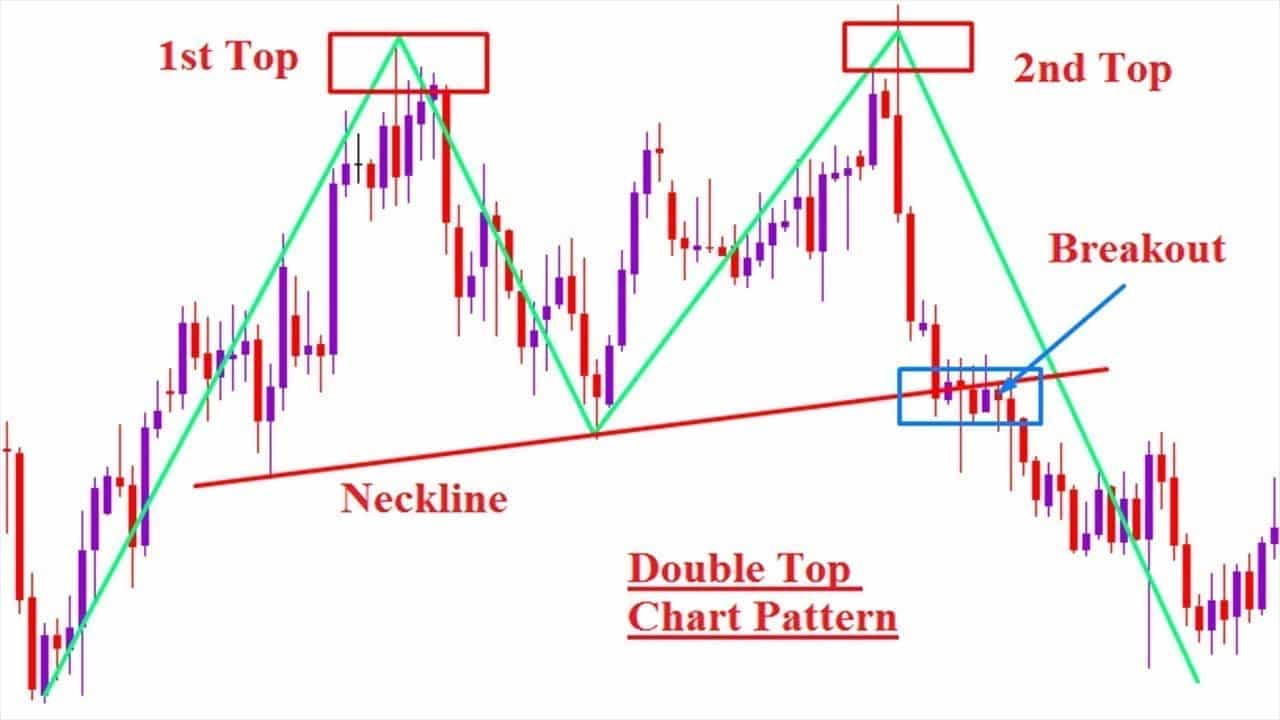 As an example of a double bottom trade, let’s use the price graph below. As it shows, the trend before the double bottom pattern was bearish, indicating this market was falling in value. In this pattern, the downward momentum stops at the first low and retraces up to the neckline.

At this point, if the momentum had continued higher the pattern would have been void. Instead, it bounced off the neckline and resumed the overall bearish trend before the first low. That momentum eventually stopped, and the second low was formed. Here, the trend experienced a more permanent reversal and continued up through the level of resistance as the neckline.

To profit in this pattern, a trader would try to open a long position at the second low. They would likely exit their long position at an early sign of reversal in the prevailing trend, at which point it would once again turn bearish.

As with a double top pattern, traders can use stops when trading the double bottom pattern. This is to protect themselves from sustaining a loss in case the market continues to fall after the second low.

Double tops and double bottoms in trading summed up

Disclaimer: All investments and trading in the stock market involve risk and is a personal decision. This article “Impact of Russia-Ukraine on crude and Forex” is not a trading advice or instruction from Instaforex Nigeria but meant to create awareness about Forex trading.